Everywhere in the city, new wider bike lanes are literally popping up or old ones are painted green to make them more visible and safe. The district Friedrichshain-Kreuzberg was followed by others such as Mitte, Charlottenburg-Wilmersdorf and Pankow, and more will probably follow. But did it first need a crisis and such an exceptional situation as Covid-19 and the lockdown? Meret Batke, researcher at Multiplicities, comments on recent mobility experiments in public space. 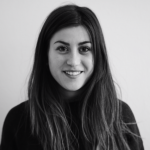 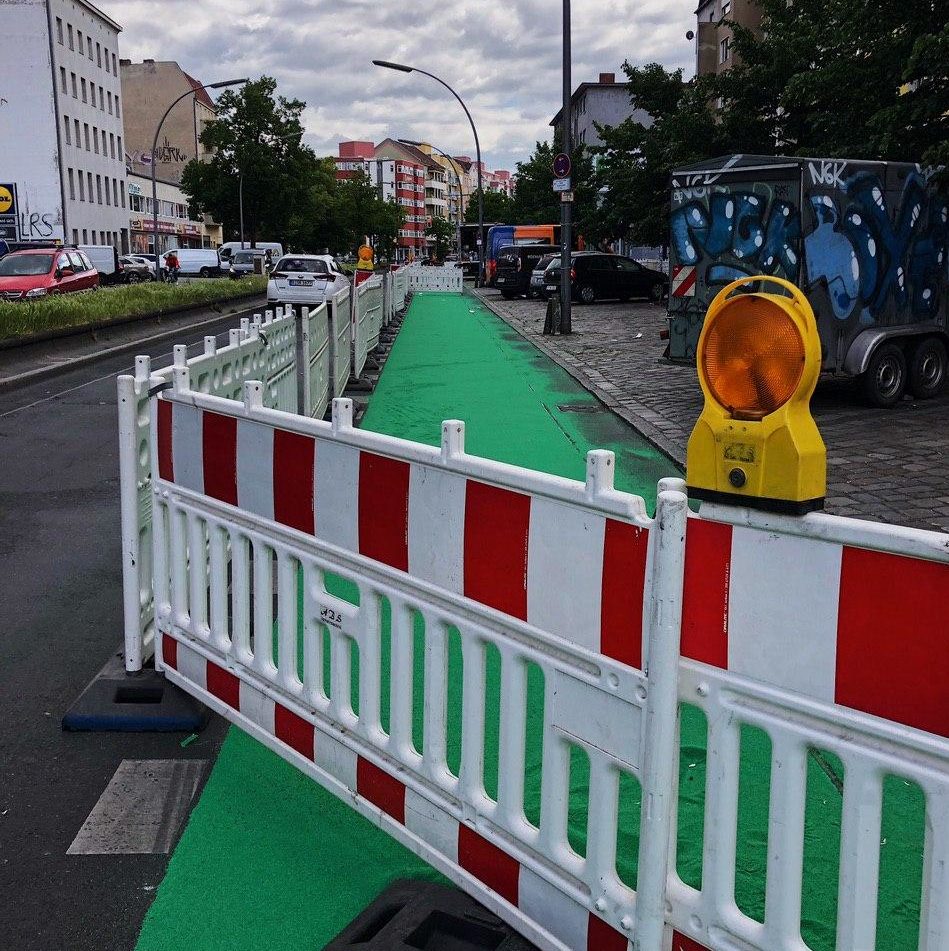 Berlin felt uncomfortable during the first weeks of the lockdown. Uncertainty and worry lay like a veil in the air and on the faces of the residents. Despite the empty streets, the city felt cramped, like all life had been taken away from it. I still remember that day in March when I stepped outside my apartment in Kreuzberg unsuspectingly and could hardly believe my eyes. There it was – the first Pop Up Bikelane in Berlin. And there was this feeling, this feeling of hope that the crisis might offer more opportunities than we had previously thought. On the bike the lockdown felt different. Suddenly there was this incredible space on the streets, due to the drastic reduction in car traffic that usually defines them. It felt liberating and, at least for the first few weeks, it almost felt as if the force of the cars on the roads had passed. What many initiatives in Berlin have been fighting for for years is suddenly possible and a reality. 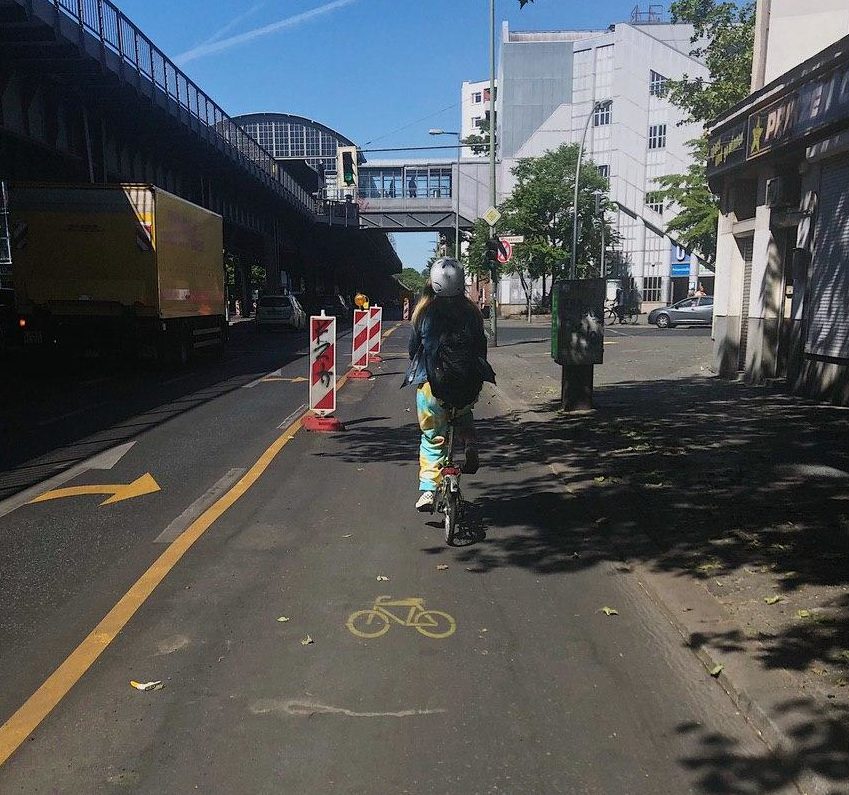 Everywhere in the city, new wider bike lanes are literally popping up or old ones are painted green to make them more visible and safe. The district Friedrichshain-Kreuzberg was followed by others such as Mitte, Charlottenburg-Wilmersdorf and Pankow, and more will probably follow. But did it first need a crisis and such an exceptional situation as Covid-19 and the lockdown? It seems so. And it seems that the city and life in crisis has become a kind of experimental field in some areas.

New forms of work, but also new forms of infrastructure and of the cityscape suddenly have the space to be tested. Covid-19 becomes a justification, an irrefutable argument for safer bikelanes on which it is possible to ride with distance. „The virus leads to a new urgency,“ says Ragnhild Sørensen from the Initiative Changing Cities e.V., which has been working closely with the Senate since 2016 and, among other things, has called for and helped develop the mobility law in Berlin. This law stipulates that cycling, walking and public transport will be considerably expanded by 2030. In most urban areas, the crisis is more likely to act as a deceleration, whereas here it seems as if Corona is speeding up the bureaucratic processes tremendously, although in Berlin they usually drag on a lot.

The district of Friedrichshain-Kreuzberg even published a document that is intended to make the implementation of temporary cycle paths legally secure and quickly feasible for the administrations of other districts. Ragnhild Sørensen emphasizes the controversial aspect of this: „Everything that is now being decreed by Covid-19 is part of the mobility law. The speed that the administrations have now is the speed that it will take anyway to implement the mobility law by 2030“. 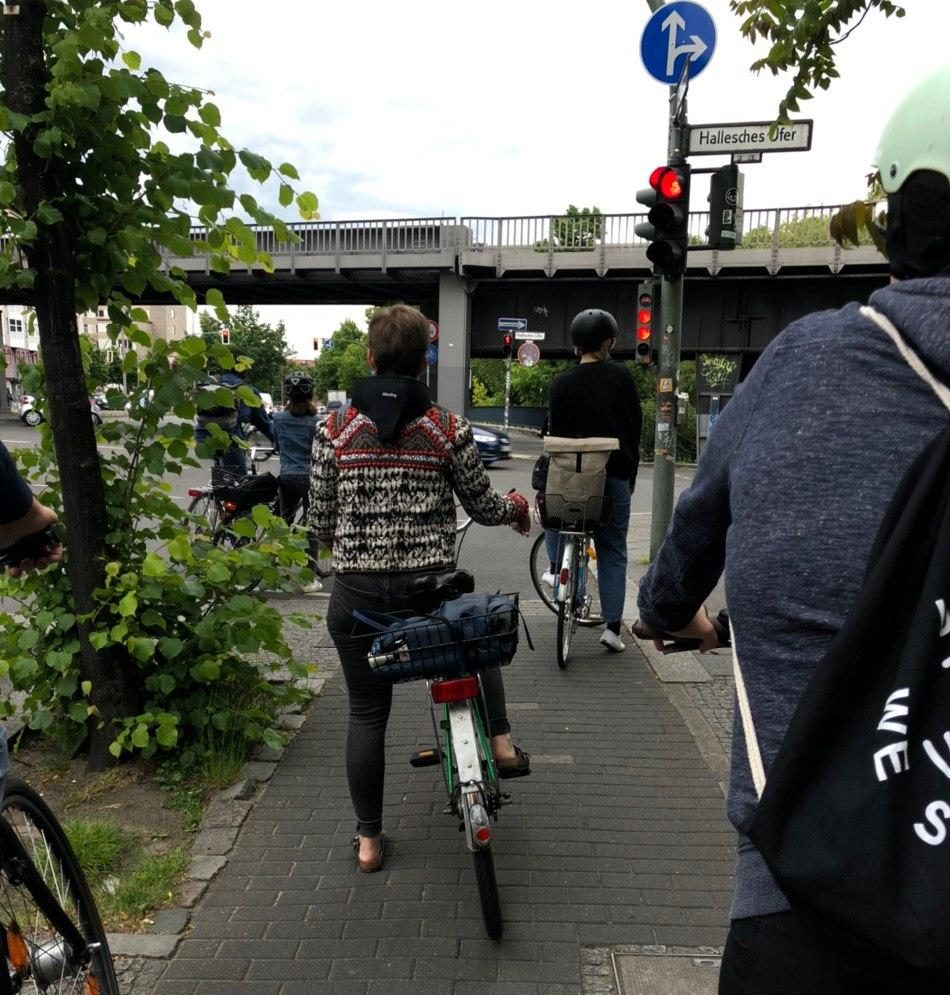 Spatial and mobility experiments in times of crisis

But apart from the positive effects on pandemic containment, these experimental bikelanes could also be an eerie step towards a turnaround in mobility. Although this has been discussed and aspired to for years, implementation has been very hesitant. At the same time, measures that create incentives to switch from the car to a sustainable alternative, be it the bicycle or public transport, are urgently needed.

It cannot be assumed that a change in thinking in the society will occur if roads continue to be defined and dominated by cars. The thesis that you only notice how much you miss something once it is gone does simply not apply to all areas of life. Sometimes one also notices how liberating it can be to let go of something. 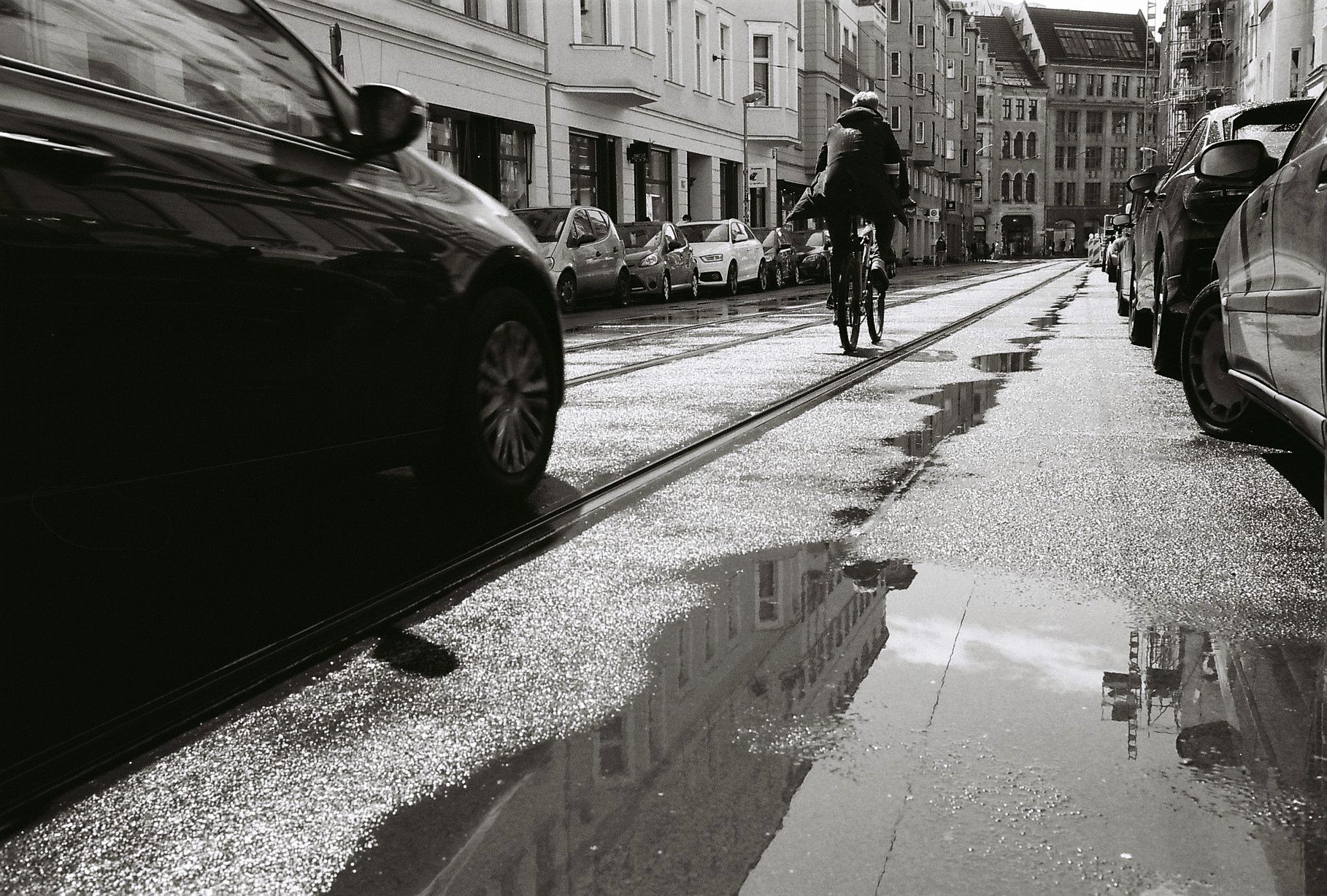 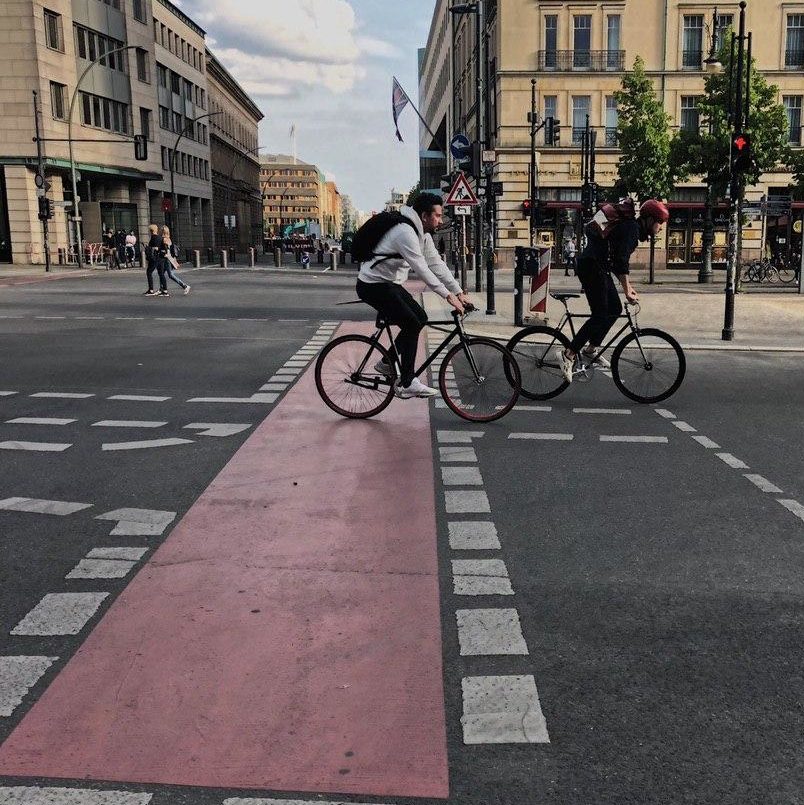 Bike riding as l´art pur l´art or an existential need?

The impression of bike riding as more than fun or lifestyle is also confirmed by a study carried out in April by the University of Amsterdam on the shuttle service that is no longer necessary due to the home office. While only 55% of car commuters missed their way to work, 91% of cyclists said they did miss their daily ride with the bike (Rubin et al. 2020). This also gives rise to hopes for a change in the mobility of some car commuters as soon as their daily work routine might occasionally return to the office. The initiative Changing Cities e.V. and the Berlin passenger association IGEB are therefore calling on the Senate Administration for Environment, Transport and Climate Protection to permanently maintain the pop-up bikelanes (Changing Cities e.V. 2020).

„The mobility law must definitely be taken seriously, it needs more pressure from the senate administration and clear steps in its implementation“, says Ragnhild Sørensen. Although Transport Senator Regine Günther emphasized that she was in favor of a permanent implementation of wider cycle paths (Die Zeit 2020), elsewhere it emerges that politicians are gambling away the chance to use the special circumstances of Covid-19 to initiate a long overdue traffic turnaround.

This is particularly evident in the car industry’s deliberations about a new scrapping premium as an incentive to gain new customers. In times of climate change, however, this is a dangerous measure at all levels. Precisely because public transport, for example, is suffering immense passenger losses as a result of the crisis and the infection-proof car could become more attractive again for many, it is all the more important to create incentives for environmentally friendly alternatives such as the bicycle. In my opinion, many people are willing to switch to a sustainable alternative, but the conditions in Berlin are simply too unattractive and unsafe for that. 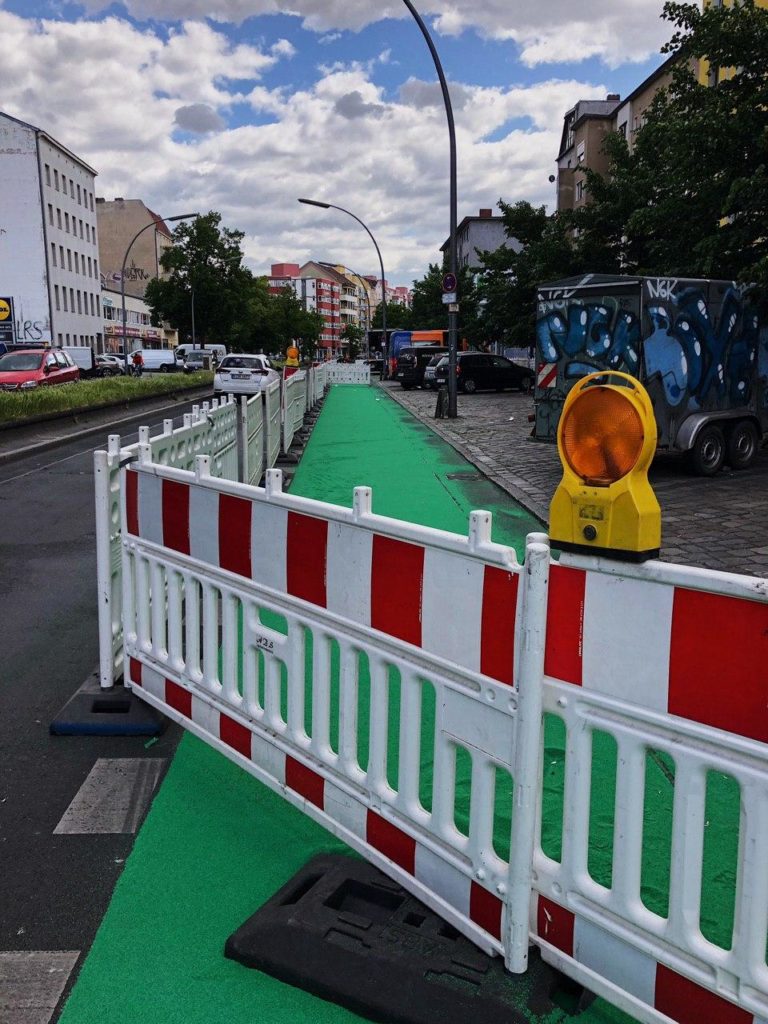 But despite the importance of incentives, a change in mobility must take place primarily in people’s minds. It’s about questioning the familiar and trying out new things. The crisis and the resulting broad bikelanes currently offer the space for that. Why, especially in a city like Berlin, where driving a car is a torture and is marked by construction sites and traffic jams, do cars have so much more space on the streets than pedestrians and bicycles? How would traffic-calmed areas change life in the city? Wouldn’t the perception of the city on a bicycle or by foot be a much more complete one, which would involve all the senses but also makes it possible to experience many more facets of the city?

Ragnhild Sørensen also emphasizes the possibilities that Covid-19 offers for a new perception of urban space: „People in the city are currently experiencing that the public space is also their space. There is a completely new kind of cooperation between civil society and administration, as, for example, temporary play streets are implemented by residents. The crisis has increased the sensitivity for public health among many“.

Open spaces in the city are important for relaxation, but also for exercise, especially now that gyms and other sports facilities are closed. The possibility to have enough space in public for physical activities is also important after the lockdown. We should therefore also see the crisis as an opportunity to identify such shortcomings in public health and find solutions that are not just temporary. Because not everyone can afford a gym or ticket for a tennis court and a city that offers enough space for free exercises for everyone would be a much more inclusive one.

So here’s a little call from me: Get on your bikes, use the Pop-Up Bikelanes and the new free areas in the city to show politicians and car drivers how much we need safe bikelanes and more open public space in the city!

Rubin, O., Nikolaeva, A., Nello-Deakin, S., & te Brömmelstroet, M., (2020). What can we learn from the COVID-19 pandemic about how people experience working from home and commuting?. Centre for Urban Studies, University of Amsterdam

Temporary installation schedules and extension of bicycle traffic facilities by the senate:

Petition from Changing Cities e.V. for safe and infection-free mobility: